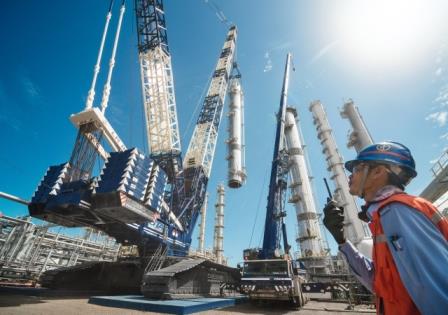 GTA’s newly acquired Liebherr 11350 Crane has appeared in the January issue of ‘Cranes Today’.  The news item focused on our project at Palembang and can be read below;

A Liebherr LR11350 crawler crane has been used to perform a single lift and a tandem lift at a fertiliser plant in Palembang, Indonesia.

Overseen by GTA Construction and performed on behalf of a joint venture between an Indonesian EPC company and a Japanese EPC contractor, the tandem lift took two hours and involved lifting a 787t ammonia converter into position at the facility.  As well as the 1,350t-capacity LR11350, a 550t tandem crane was also used.

GTA’s General Manager for Construction, Mr E Warman said: “  The main benefit of the LR11350 for this particular tandem lift was that the counterweight for the super-heavy lift function is easier to adjust than on competitive models.

“This allowed the lift to be completed more easily as the crane was more manoeuvrable in the confined working conditions of the site, which other than limited space presented no other difficulties.”